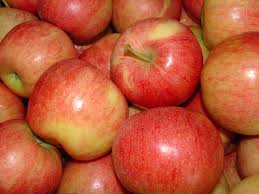 Gala  is now the biggest selling apple variety in the UK and over the next few years production is expected to increase by another 40 per cent. With its sweet flavour and attractive, sunset-red stripes, it is perhaps easy to see why it is so popular.  Gala, like the equally ubiquitous Braeburn, is an apple of New Zealand origin.  They both  became popular  in the 1990s due to their availability in the UK’s off-season. Trial orchards of these antipodean apples were planted and the effect has been a revival of the English apple industry with figures from 2011 showing 39 per cent apples sold here were grown here. This is good news for apple growers, but many people mourn the lack of traditional British apples on our supermarket shelves.

Raymond Blanc, the two michelin starred chef,  believes that it is our addiciton to sugar that has led to the popularity of these New Zealand varieties. In an interview with the Sunday Telegraph in 2014, he suggested that consumers confuse sweetness with flavour. In his view,  the best tasting apples, such as the Cox’s Orange Pippin,  have a complex flavour that combine a mix of sweet, sour, acid and bitter. So, this is our guide to a few apples that  sadly aren’t available in our supermarkets but which we at Orchard Origins think are delicious.

A 17th century russet, the Ashmead’s Kernel is noted for its very distinctive pear drop flavour. It should be picked late in the season and stores well. It is great as an eating apple, but also makes a useful aromatic addition to juice.

This apple was grown in 1708 from one of three apple pips sent from Normandy to Sir Henry Goodricke of Ribston Hall  at Knaresborough, Yorkshire. It has a firm, fine-grained flesh with an intensity of flavour similar to a Cox but with more acidity. It’s this sharpness that makes it good as a cooker as well as an eater.  It was very popular in Victorian times as a late Autumn apple.

This old and very distinctive dessert variety has small golden coloured fruit that have a very unusual musky pineapple flavour. It may be diminutive in size but it still packs a punch.

Another old variety popular with the Victorians, this apple is crisp and juicy with a slight nutty flavour. It’s distinctive pear-shape makes it easily recognisable. We add it to juice to add depth of flavour.

A small fruit with a bright yellow skin which when perfectly ripe has flavours of quince, pear and lemon. This apple degrades quickly so it’s one to be enjoyed in the garden straight from the tree.